This past week I've been working as a photography intern at the Ohio State Fair and so far it's been a pretty great experience.  I've got another week left and I'll be posting some of my shots when the fair ends.  I've been trying to take the time to really get creative with my shooting.  Usually my go-to style is to do symmetrical, medium shots.  I'm trying to break that mold while I'm working the fair.  Don't get me wrong, I'm still doing the medium symmetrical shot and I'm making sure I get a nice clean photo before trying to get super creative.  I just don't want to take a bunch of risks and then end up with absolutely no usable photos. It's not usually an issue, normally if it doesn't look like it's going to be a good shot I don't take the picture, but you never know.

Hello again everyone.  Sorry I've been a little MIA for the past two weeks or so.  I planned to do a blog post every week and so far I'm not upholding that so well.  In my defense, I'm still fairly new to this and the past few weeks have been crazy.  Don't worry, things are starting to get a little easier which I why I'm posting today.

A few weeks ago, I started on a project about Schiller Park.  I went to photograph members and friends of the Ohio Chalk Art Guild, who were drawing murals to celebrate the park's 150th anniversary.  I had such a great time meeting the artists and talking to them about their craft.  I decided to create a little mini story based on my day of shooting the event so here it is.  Keep in mind however, that this is only a small piece of my overall project on the park.  Because of the crazy past few weeks, I haven't been able to work on it as much as I have wanted to.  But things have started to calm down a little bit so I'll be back at it.  Stay tuned for more soon. 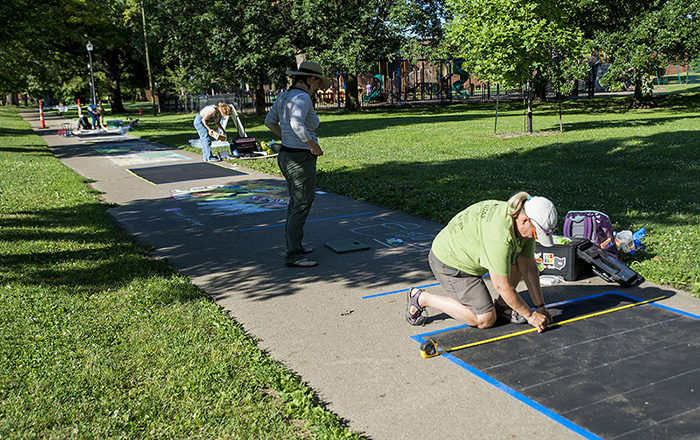 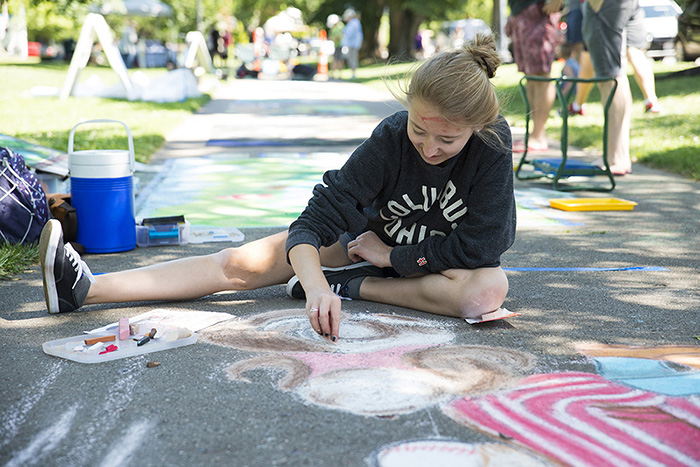 The Friends of Schiller Park invited the artists to create chalk art based on a list historic themes they provided.  Caitlyn Cowell chose to draw a vintage baseball player, inspired by the baseball games that took place at Schiller.  Cowell has been doing chalk art since sixth grade.  "I had a really mean art teacher who tried to tell me chalk wasn't a medium," says Cowell.  "So I went home and drew a picture with calk for my mom." 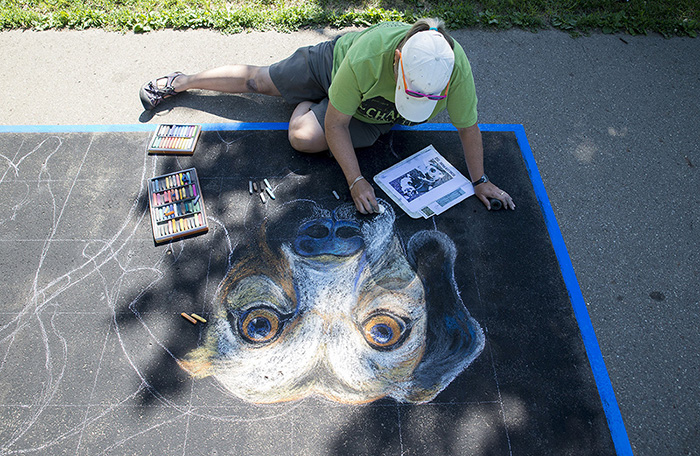 Sheryl Lazenby uses a grid method to draw her piece in order to create accurate spacing and lines from a reference photo.  Schiller is a popular location for dog walkers, which inspired Lazenby to draw dogs for her mural. 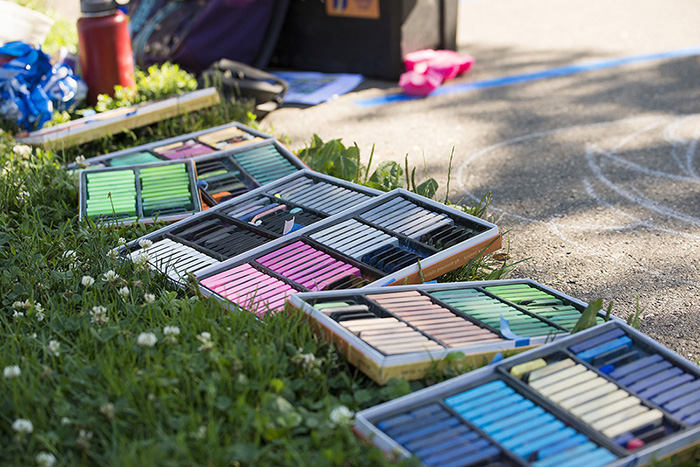 The artists use a variety of different chalks and pastels to create their artwork. 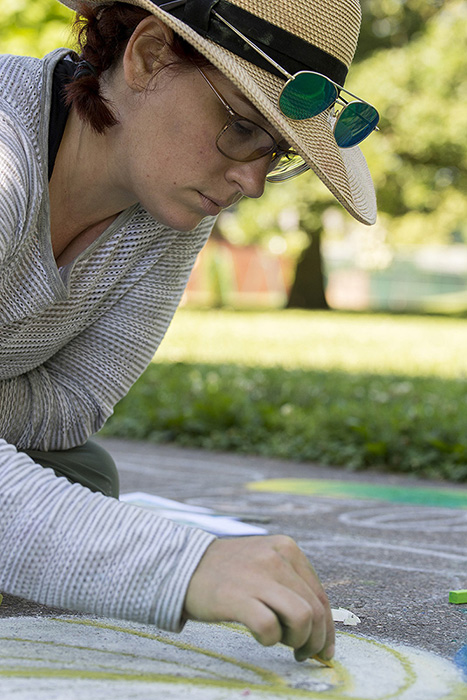 Jennifer Russell works on a freehand chalk drawing of hostas.  "I prefer to do more freehand," says Russell.  "I get a little OCD when I do grids.  If I do a grid it has to be perfect.  I like to avoid that as much as I can." 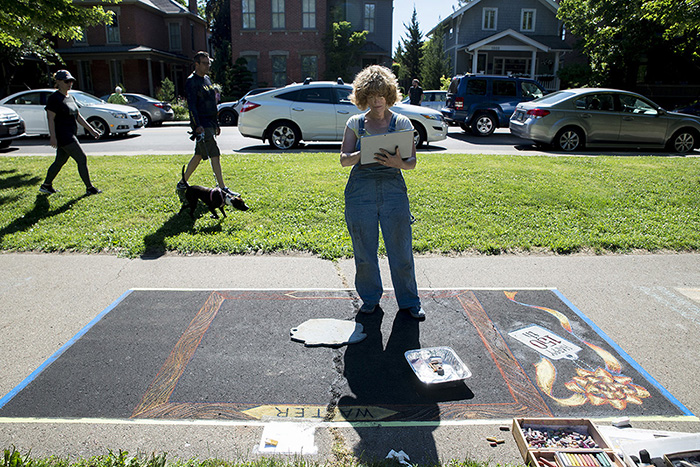 Ann Alexander works on her plan for her mural.  She chose to do a piece on the new park fountain that was donated by the Friends of Schiller Park.  She hadn't seen the fountain before, so she worked on a sketch at the pond before drawing it into her piece. 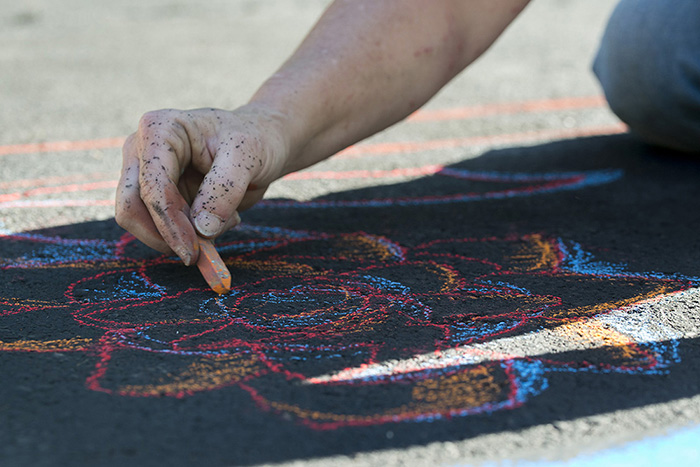 Ann Alexander draws a ribbon incorporated into her piece. 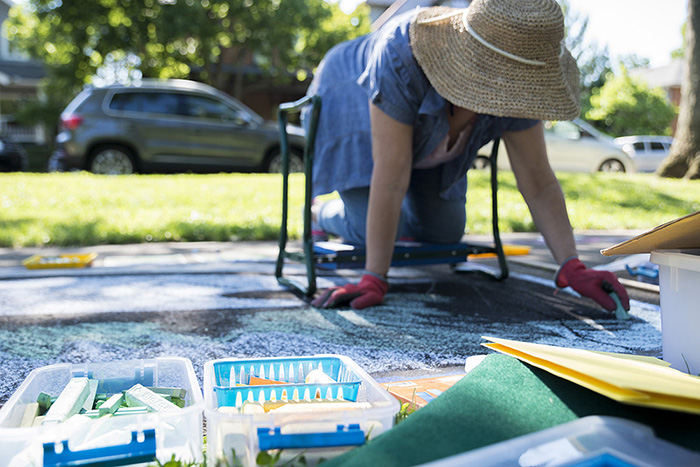 Ginny Baughman started doing chalk art about a year ago and is working on her first landscape piece at Schiller.  "As an artist there's always things you want to try, and for me chalk was one of those things," says Baughman.  "The hardest thing is mostly the physical part.  I started doing yoga just for the events." 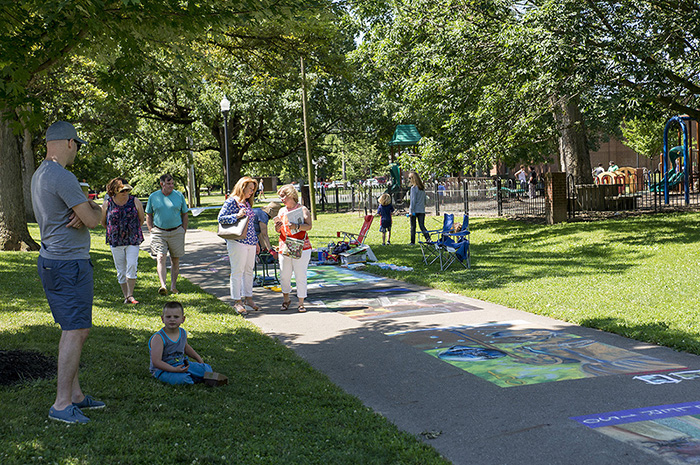 Groups of people gather to watch the artists work on their murals and to admire the craftsmanship.

Well, I've finally done it.  I've written my first blog post.  For those of you who don't know, my name is Alex Cenci and I'm a photographer.  I would hope that would be obvious, since this is on my website and everything, but you never truly know how people come to stuff on the internet.  You may have searched for something in google or bing or another search engine and my blog randomly pops up.  Hopefully you didn't search for anything too strange.  It would be a real bummer if my blog came up when you tried to search for "elephants pooping on humans".  You most likely won't find that here.  I'm not going to say you most definitely won't find that here, who know what the future holds.

Anyways, this blog has been in the brain works for a long time.  I know, I should have a photo blog as a photographer, right?  Well, I always figured my work would say things for me.  I thought if I kept my voice low, the voice of my subjects would stand out more.  Plus, I never really had that much to say.  However, after I came home from New Mexico and I started looking for jobs, things started to look a little dim.  Anytime I had gotten interviews I was always passed over for someone with more experience, I'm pretty sure newspapers just throw my applications away, and eventually I just kind of stopped trying.  I got depressed at times because I was living with my parents again, I working at a part-time job that I hated and I was struggling to figure out how to snag that first job.  It also didn't help that most of my friends from college had successfully gotten their first gigs.  After loafing around for a while and feeling sorry for myself, I finally took some action.  I started writing down ideas for stories, I got different part-time jobs, I got back to my portrait business, I started going out and photographing again, and now I'm starting this blog.  I still want the voice of my subjects to stand on its own, but I realize now that I have my own story to tell.  My story makes my subjects' stories possible and the fact that I have a voice is not a bad thing.  So here we are, my first blog post.  Here you will find my story - the story of my struggles and my successes, the stories of the people I meet and photograph, and the journey I take in becoming a resectable visual journalist.  But you know, first I have to find a job.

P.S.  If you're in the same crappy rowboat that I'm in right now - you know, recently trained for a job field you can't seem to break into - don't worry, as they say in High School Musical "we're all in this together".  Wow, it's amazing how cheesy that phrase has become thanks to that movie.  My point is everyone struggles and as bad as things may seem they do get better.  Just keep trying, keep doing what you love to do and at some point things will start to happen.  Remember that, and I'll try to keep living by my own advice.